Prompt Treatment For Blastomycosis In Dogs Is Key To Recovery 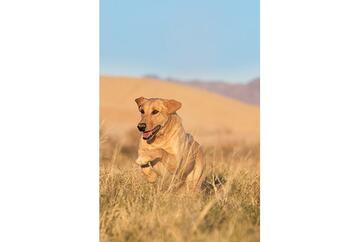 “This is a special dog,” says Fred Kampo of Oshkosh, Wisconsin, referring to the black Labrador Retriever he calls “Stinger.”

While everyone likes to think his or her Lab is special, Kampo’s perspective is broader than most. A member of the Retriever Field Trial Hall of Fame, inducted in 2012, Kampo is president of The Labrador Retriever Club, the American Kennel Club parent club of the Labrador Retriever.

Last summer, FC-AFC B Bumble was on a serious roll. In June, the 6-year-old male, who had earned more points over the course of his career than any retriever his age or younger actively competing in field trials, churned through 10 grueling series to become one of 13 finalists from a starting field of 110 at the National Amateur Retriever Championship in Stowe, Vermont. A few weeks later in mid-July, Stinger topped a field of 82 in a hotly contested open all-age stake at the Mississippi Headwaters Retriever Club in Bemidji, Minnesota.

Two days after that impressive win – two days — this elite canine athlete could barely walk. Stinger was diagnosed with blastomycosis, a fungal infection that can occur systemically or locally, laying even the most robustly healthy dog low and sometimes with devastating, even deadly, consequences.

“The lameness was his first symptom,” says Kampo, who’s handled Stinger to the majority of his field trial wins. “There’d been no coughing or respiratory difficulty of any kind, which I’m told is typically the first sign a dog may have ‘blasto.’”

In Stinger’s case, the disease had attacked several of his vertebrae, and because his spinal cord was at risk, all off-lead activities were immediately curtailed. Crate confinement and walking on leash became the order of the day for the next five months.

Following an initial 10-day period in which he received the fungicidal drug itraconazole (ITZ) intravenously, Stinger was put on a daily oral dosage of ITZ. It had been a frighteningly swift fall from the top of the field trial world, but it could have been much worse.

Triggered by a Wet Environment
Blastomycosis is caused by a fungal mold, Blastomyces dermatitidis, associated with moist, slightly acidic soil and decomposing organic matter, such as wood and leaves. The mold releases microscopic spores into the air, and when these spores are inhaled, infection can result.

“When the spores get way down into the lungs is when it creates a problem,” says Alfred M. Legendre, DVM, DACVIM, an infectious disease specialist at the University of Tennessee College of Veterinary Medicine.

The warm, moist environment of a dog’s lungs triggers a transformation of the spores into a yeast that can spread via the bloodstream or the lymphatic system to other parts of the body. Although rare, blastomycosis also can occur when spores are introduced to an open wound.

“Blastomyces is a pretty big organism in yeast form,” explains Dr. Legendre. “The yeast is too big to get down deep into the lungs to cause disease.”

The condition is not contagious. “It doesn’t spread dog to dog, or dog to person,” Dr. Legendre says. “When dogs and their owners have simultaneously developed blasto, it is because they were exposed to the spores at the same time.”

Dogs and humans are the most commonly infected species, with dogs 10 times more likely to develop the disease than humans. Geographically, blastomycosis is most prevalent in the valleys of the Mississippi, Ohio and St. Lawrence rivers, the Great Lakes states and certain parts of Canada. According to the Centers for Disease Control and
Prevention, Wisconsin has the highest reported incidence of blastomycosis for humans, with rates in some northern counties 10 to 20 times above the national average.

In the case of a dog like Stinger, who’s traveled all over the country to compete in field trials, it’s hard to know precisely where or when he contracted the infection, especially since signs of the disease may not occur for weeks or months. Coincidentally, Kampo has a cottage in northern Wisconsin to which he often takes Stinger.

Exposure to areas that have been recently excavated has been shown to increase the risk of blasto in humans, presumably because it liberates large quantities of spores into the air, but the real risk of blastomycosis is proximity to water or moisture. Multiple studies have shown that dogs living within 400 meters of water are vastly more likely to develop blastomycosis than other dogs. Indeed, there’s some evidence to suggest that the shores of beaver ponds tend to be blasto “hotspots,” or what epidemiologists call “enzootic areas.” 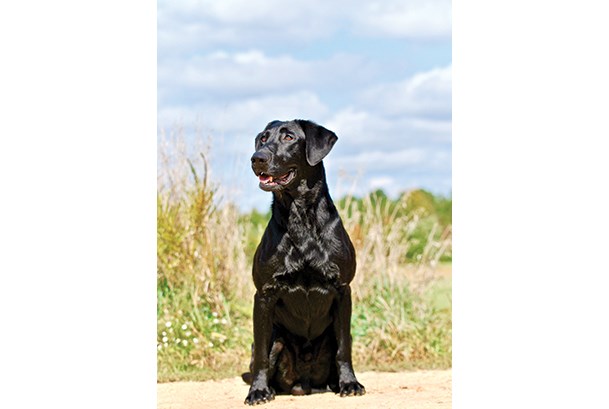 Regardless, the Blastomyces organism flourishes only under certain environmental conditions. This helps explain why dogs such as Labradors and other hunting dogs that spend a lot of time outdoors are more susceptible to blastomycosis than those that are largely indoor dogs.

Statistically, males are slightly more likely to develop blasto than females, with peak susceptibility to the disease occurring at 2 years of age. Although there’s some indication that dogs may be able to recover spontaneously without treatment from mild cases of the affliction, this has not been established as a fact, says Dr. Legendre.

Early Diagnosis & Treatment Are Key
A dog exhibiting clinical signs of blastomycosis requires immediate veterinary attention. A confirmed diagnosis should be treated promptly and aggressively to increase the likelihood of a full recovery. There’s no “wait and see” with blasto because no matter how mild the signs may be, the disease has life-threatening potential and thus should be taken seriously.

The first thing most owners notice in dogs infected with blasto is that they begin breathing “hard,” as if they’re having difficulty getting air into their lungs. This labored respiration is typically accompanied by dry, raspy chest sounds and sometimes by intermittent coughing. Many owners also notice a decline in their dog’s energy and stamina levels.

Other clinical signs of blastomycosis include limping or lameness; “oozy” skin lesions on the nose, mouth or paw pads, though other areas can be affected as well; inflamed eyes; and enlarged lymph nodes. The challenge for veterinarians to diagnose the disease is that other conditions can produce similar signs. In areas where there is not a lot of blasto, the disease may not be on a veterinarian’s radar. 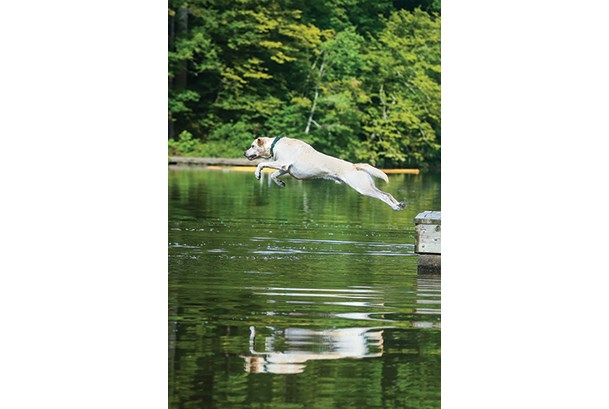 “People who travel to hunt or compete with their Labrador and recognize any of these signs should tell their veterinarian where they’ve been,” Dr. Legendre advises. “If you live in Kansas but you’ve hunted in Wisconsin, your veterinarian needs to know.”
Diagnosis of blastomycosis is made from blood testing combined with a biopsy to identify the organism. A more recently developed urine antigen test has been successful in detecting extremely low levels of an infection. Once a definitive diagnosis of blastomycosis has been made, treatment with anti-fungal drugs should start immediately.

The standard fungicide used to treat blasto is itraconazole, though fluconazole can be used as well. The disadvantage of ITZ is that it ranges from $8 to $12
per tablet, with a Labrador-sized dog typically requiring two or three doses a day for at least 90 days. Fluconazole is less expensive but not as effective, requiring a longer period of administration to achieve the same result.

“The actual percentage of relapse could be lower,” says Dr. Legendre. “This is because the urine antigen test is capable of detecting much lower levels of infection than was previously possible. Instead of stopping treatment when a dog is symptom-free, veterinarians now are able to continue treatment until the patient is truly infection-free. Most dogs do quite well with treatment. They can be expected to make a full recovery and return to doing all the things they did prior to the onset of symptoms.”

The exceptions, he notes, are dogs in which blastomycosis has spread to the brain — they usually succumb to the disease, unfortunately — and dogs with severe lung involvement. In these cases, the fungicide can trigger an inflammatory response when the blasto yeast die off, making the initial days of treatment a critical period.

“Most dogs with a severe lung infection from blasto die within the first seven days of treatment,” Dr. Legendre says. “If they’re able to survive long enough to get past the pneumonia, their prognosis improves significantly. Some dogs may have
decreased lung capacity as the result of scarring, however.”

Because blastomycosis is caused by an organism that occurs naturally in the environment, it is virtually impossible to eliminate the risk of infection. Early diagnosis and treatment are key to success.

“You should keep an eye on your dog and be aware of the signs of blastomycosis,” Dr. Legendre says. “If you notice anything that strikes you as suspicious, be sure to take your dog to the veterinarian.”

Back in Stinger’s camp, the mood is upbeat. Last December, he was cleared for limited off-lead activities. “Stinger is looking awfully perky these days,” Kampo says.

The retreiver’s prominent field trial record makes him a valuable stud dog, and after a temporary hiatus due to concerns about his spinal health, he’s back to having his semen collected and banked on a regular basis. He’s scheduled for a CT scan to evaluate his spinal condition.

“Stinger’s veterinarians believe he can compete again, and I hope they are correct,” Kampo says.

Recognizing Signs of Blastomycosis
Clinical signs of the fungal infection blastomycosis may occur as early as a few weeks after exposure or may take several months to become evident. Being aware of the signs, particularly if your dog has been in an endemic area, is important in order to start treatment as soon as possible.