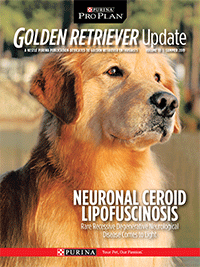 When a 1 ½-year-old field-bred female Golden Retriever named “Lexi” (Turbo’s Timeless Treasure) was confirmed to have the rare recessive degenerative neurological disease, neuronal ceroid lipofuscinosis (NCL), in the fall of 2018, it began a scurry of submissions of DNA from Golden Retrievers throughout the country for genetic testing.

It was heartbreaking to Turbo Golden Retriever breeders Ron and Pat Rubrecht of Land O’Lakes, Florida, to learn that a dog from a litter they bred had NCL — a disease they had never heard about — and one they sold to a field-trial home. The cause of Lexi’s restlessness, anxiety, pacing, declining motor skills, bumping into things at home, and snapping at flies that weren’t there was due to this lysosomal storage disease.

Essentially a failure of the lysosome system that recycles amino acids, or proteins, in cells, NCL occurs in Golden Retrievers due to a mutation in the CLN5 gene. This results in the accumulation of ceroid lipofuscin — an unusual material that glows fluorescent yellow when examined under a microscope — in the brain, retina and other tissues. Affected dogs develop normally until the storage material builds up and interferes with functioning. Golden Retrievers typically show signs around 1 to 2 years of age.

Fortunately, DNA testing is available that allows Golden Retriever breeders to determine their dog’s genetic status and avoid producing puppies destined to develop NCL. This autosomal recessive condition occurs when the sire and dam are carriers and produce a litter in which an average of 25 percent of puppies are affected. As predicted by the odds, Lexi’s littermate sister, “Gracie,” also had NCL.

It was imperative to Ron Rubrecht to raise awareness about NCL and the genetic test developed at the University of Missouri. He reached out to the owners of puppies he bred that were potentially affected. Topbrass Golden Retriever breeder Jackie Mertens, of Palm Bay, Florida, the breeder of Lexi’s sire, “Laddie” (Topbrass Lad Of The Lakes MH WCX), helped get the word out to the field community.

More than 400 dogs were tested quickly when the news came out. DNA was sent for processing from living dogs and also dogs passed away that had been stored at the Canine Health Information Center (CHIC). Understanding the tangled web of the disease’s origin in particular bloodlines was possible, providing that DNA was available to screen dogs.

“We were fortunate not to find any affected dogs,” Mertens says. “Hawk has sired about 15 litters, and none has produced affected puppies. It is pure luck that the bitches that have been bred to him were all clear of the NCL genetic defect.”

Traveling back in her breeding, Mertens now knows that Libby and Laddie’s dam and Lexi’s granddam, “Paws” (AFC Topbrass Pawsability OD FDHF), who passed away in 2013 at the age of 14 ½, was a carrier. An Outstanding Dam, GRCA (Golden Retriever Club of America) Field Trial Hall of Fame inductee and a doubleheader winner, Paws and Mertens were inseparable. She also knows that Paws’ sire, “Vinny” (FC Windbreaker’s Premium Vintage), who died in 2000, was a carrier. Owner Pat DeNardo had Vinny’s stored blood tested when she learned about NCL.

Taking a common-sense approach on how to stop producing puppies born with NCL, Mertens says, “The best advice is to test the sire and dam before you breed because you can breed a carrier, you just can’t breed a carrier to a carrier. You don’t want to throw out good genes or reduce genetic diversity.”

Golden Retrievers are one of many breeds in which NCL gene mutations have been discovered, though the disease results from different mutations among the breeds, occurs at different ages depending on the underlying mutation, and has different clinical presentations and different penetrance rates between the different forms of NCL. In most breeds, except Tibetan Terriers, Border Collies and American Bulldogs, it appears to be a rare disease, though it is likely that many cases of neurological disease in dogs are not recognized as potential NCLs

NCLs also occur in people and include the fatal Batten disease that affects children. Symptoms of NCLs in people include visual impairment, declining cognitive and motor functions, seizures, brain atrophy, and early death.1 As many as 13 NCL gene mutations are recognized. Among animal species, NCLs are most frequently reported in dogs, though one or more cases have been reported in cats, sheep, cattle, ducks, ferrets, goats, horses, monkeys, parrots, and pigs.1

“Regarding similarities among the breeds, all of the NCLs occur because of mutations in genes involved in the necessary breakdown of protein that have accumulated damage over time,” says Martin L. Katz, PhD, director of the Neurodegenerative Diseases Research Laboratory at the University of Missouri. “These damaged proteins cannot be degraded and accumulate in the cell to such a high degree that they are likely to impair cell function, particularly the function of nerves.”

The genetic groundwork that led to the DNA test for Golden Retriever NCL was done in Dr. Gary Johnson’s laboratory at the University of Missouri. It began in the summer of 2014 when a breeder submitted 18 DNA samples of three generations of a Golden Retriever family after producing two litters of nine puppies from the same healthy parents, in which four dogs from the first litter showed signs of a progressive neurological disease. The published study in which the disease-causing mutation was reported appeared in the June-July 2015 issue of Molecular Genetics and Metabolism.

“The parents had the same healthy dam, but each had a different sire,” Dr. Katz says. “The four dogs from the first litter exhibited progressive neurological signs characteristic of NCL starting around 13 months of age. Anxiety, constant circling, tremors, aggression, ataxia (incoordination), seizures, and visual impairment were among the abnormalities that became apparent at 15 months of age or older.”

Whole genome sequencing of the DNA from one affected dog led to the identification of a homozygous mutation in the CLN5 gene that produced a frameshift and premature termination codon.1 Genotyping was performed on the common granddam, maternal grandsire, sire and dam, clinically affected female and her littermate sister, three normal littermates, and all nine puppies from the second litter. The researchers also genotyped 1,062 Golden Retrievers randomly selected from archived DNA at CHIC and their own database, and 143 dogs representing 99 breeds other than Golden Retrievers.

“The findings from these analyses indicate that a dog with a defect in both copies of a gene called CLN5 is unable to make a protein that is important for maintaining normal functioning of the nervous system,” Dr. Katz explains.

Two of the affected littermates from the three-generation family became progressively worse until they were euthanized at 30 to 31 months of age due to the severity of their disease. Two additional dogs from the same litter had similar progressive neurological signs. Postmortem evaluation of the brain and retinal tissues confirmed that the disorder was a form of NCL.

Veterinary neurologist Dennis O’Brien, DVM, PhD, the Chancellor’s Chair in Comparative Neurology at the University of Missouri College of Veterinary Medicine, explains, “When a Golden Retriever inherits the CLN5 gene mutation, there is a defect in a series of three DNA molecules called codons that code for individual amino acids. In this case, two of those DNA molecules are knocked out, causing a frameshift to the left and premature termination codon. As a result, when the two DNA molecules are deleted, the amino acid sequence is altered and the protein does not function as it should.”

As the recycling center of cells, lysosomes break down proteins into amino acids that can be reused to build new proteins. “A new specific enzyme is required for each step in the breakdown of a complex protein into amino acids,” Dr. O’Brien says. “A hereditary deficiency in one of those enzymes sets up a road block in the breakdown of the protein. The fragments of protein then build up in the lysosome, which is where the name lysosomal storage disease comes. Over time, either the buildup of the degraded protein or the lack of the recycled amino acids interferes within the function of the cells and progressive disease results.”

Because lysosomal disease only affects the recycling of proteins, dogs with the disease initially produce all the protein they need and thus may develop normally for the first year or so. “It is only when enough storage material builds up in the cells to interfere with functions that the clinical signs become apparent,” says Dr. O’Brien.

As the disease progresses, so does the severity of clinical signs. This is what happened to Lexi. Her condition became progressively worse until she was euthanized in November 2018. Her littermate sister, Gracie, also was euthanized.

Although NCL is a challenging disease for an owner or breeder to face, with the discovery of the gene mutation and development of the NCL genetic test for Golden Retrievers, selective breeding can ensure affected dogs are not produced. “The nice part is you’ll never breed an affected dog if you use genetic testing,” Mertens says.  n

A DNA test for the CLN5 mutation that causes neuronal ceroid lipofuscionosis (NCL) in Golden Retrievers is available through the Orthopedic Foundation for Animals. Having a recessive inheritance pattern, NCL occurs in dogs in which both the sire and dam are asymptomatic carriers. A carrier-to-carrier breeding produces progeny in which, on average, 25 percent are affected, 50 percent are carriers, and 25 percent are clear.

Through April 22, 2019, NCL genetic testing at the University of Missouri, including samples sent for research and DNA banked at the Canine Health Information Center, has been done on 3,190 Golden Retrievers. The majority, 3,010, were found to be clear. There were 153 carriers, and 27 dogs were affected.

“This is a low frequency for the overall Golden Retriever population,” says Liz Hansen, project coordinator at the Animal Molecular Genetics Laboratory of the University of Missouri. “As some unfortunate breeders and owners know, this is a deadly and devastating disease that kills young dogs just entering the prime of their lives. This makes it very important to know the genetic status of dogs being bred so two carriers are not bred to each other, creating a risk for affected puppies.”

Rhonda Hovan, research facilitator for the Golden Retriever Club of America, advises, “The use of DNA tests to reduce recessive disease genes should be done slowly and safely, recognizing that carriers very often have value as breeding dogs even when they carry serious diseases such as NCL. Our breed cannot withstand repeatedly wiping out disease genes in a short few generations, because all the generations that follow will be at risk for ‘new’ diseases driven to the surface by continually reducing genetic diversity.

“Breeders should be careful to avoid too hastily purging carriers because rapidly reducing the breed’s gene pool almost guarantees that the next genetic disease is right around the corner – and sometimes it’s worse than the initial targeted disease.”